When I am archiving my discs to M-Discs I want to get to make sure I get the best quality results. This then means that you need to measure the quality of the various drives. The problem is actually more complicated than it appears as although CD's, DVD's and Blu Rays all look very similar with 12cm polycarbonate discs there are big differences in what the error rates of each disc mean.

The raw data is corrected by algorithims that vary across the technologies to proved final results. When you verify a disc you are verifying that the final information after all the error correction is the same. However by looking at raw quality of the information you can get a metric of how good the quality of the disc is and if it is deteriorating long before information is actually lost.

The collecting of information for CD's is widespread and many burners support it. At the time of writing I have been unable to find a commercial disc and software to measure the raw error rate of Blu Ray drives. So I am going to test on CD's and apply the lessons to the Blu Ray drives.

The first level of error correction is that 8 bit bytes are converted to a 14 bit pattern with a 3 bit seperator (8 into 14 modulation (EFM)). The reason this is done is both to have additional error correction but also to reduce the highest frequencies used. So single bits are never used. This is the first error correction level. There is then a further level correction level. At the back of a review there is a very good table showing how the information from sectors is laid out on the disc.

WHAT ARE ERRORS?
Block errors on a disc are not a physical thing. They are a manifestation of how a disc interacts with a player. So different players can produce different error-rates from the same disc. Although there are rigid specifications that define what a CD should be, there are no such specifications for players. Therfore, to ensure wide compatibility, discs should have low errors. Additionally, a disc that is unreadable on one player, may seem to perform well on another.

BLER
BLER, or Block Error Rate, is the number of data blocks per second that contain detectable errors at the input of the C1 decoder. The “Red Book” specification allows BLER up to 220 per second averaged over 10 seconds. These days, with high speed readers commonplace, the generally accepted maximum is 50.

E12, E22, E32
An E12 error means that one bad symbol was corrected at the C2 stage. E22 is two bad symbols, and E32 is three or more bad symbols at C2 and therefore cannot be corrected. It is theoretically possible for C2 to correct four bad symbols, but not all players can do so. To allow for high compatibility, we consider E32 to be uncorrectable, even though some drives may be able to correct it" [1] deanwitty

A number of tools were tested eg OptiDrive, Nero Speed Test but the one that gave the best information was QPXTools 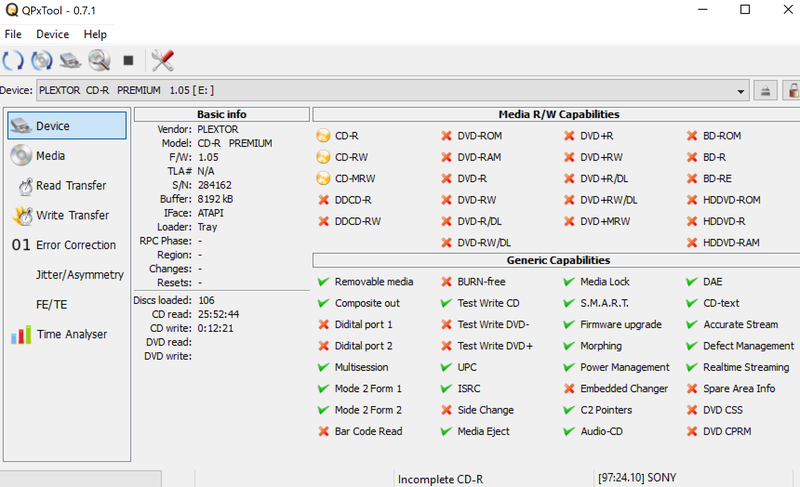 The above image shows the information it gives on each drive. It also has a nice command line tool which gives full information.

Using a number of discs 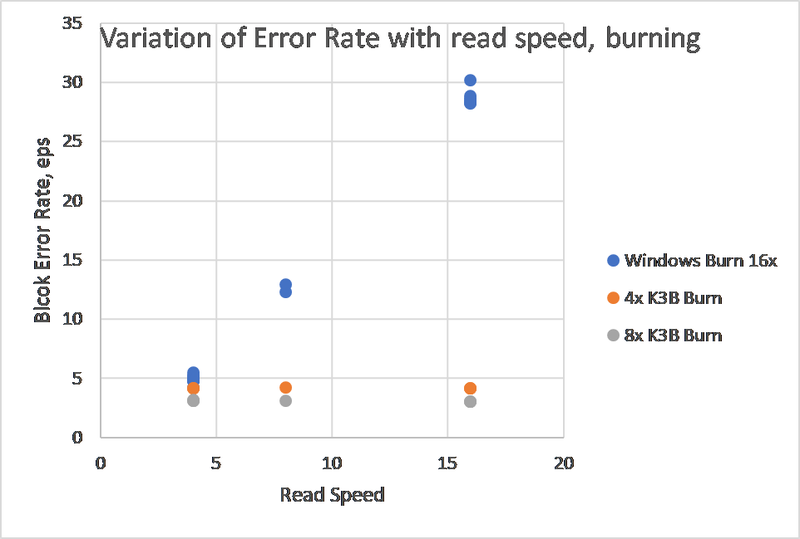 Further testing is going to be required. It also points to trying to find a Blu Ray testing regime in order to get good data.

The Gui can show variation of the read quality across the disc. 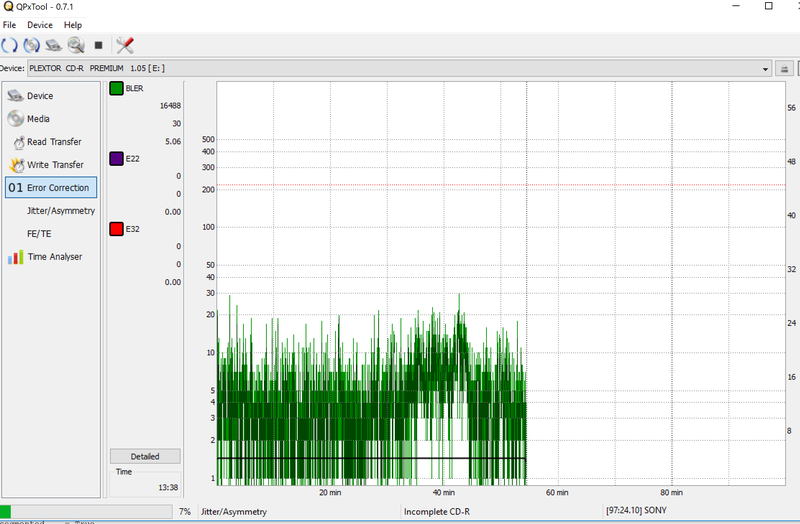 As mentioned above QPXTools will not test on any of the drives I currently have.

Reading a CDRinfo [2] test of different blu ray media I was struck how important it was to not put your finger prints on your discs before recording (slightly more tolerant when reading). Generally data signals recorded over fingerprints contain much more errors than ROM data signals read through fingerprints.

This is the reason that fingerprint-resistance is viewed as more crucial property in BD-RE or BD-R, compared to BD-ROM."

The implication of this that ideally you need to have a clean air supply and a hands free environment.